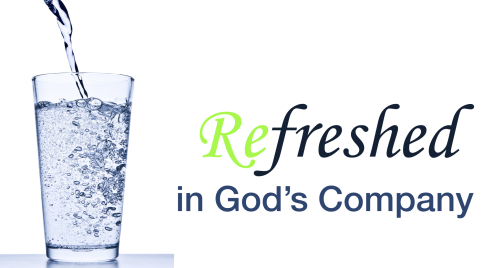 As we follow Jesus, we encounter refreshees and refreshers: people who need refreshing, and people who provide refreshing for others. Surprisingly, by the time Paul was in Corinth, writing the letter to the church in Rome around the year 55AD, he needed refreshing. He writes in Romans 15:32,

so that by God's will I may come to you with joy and be refreshed in your company.

1. Context: Why Paul wrote this letter?

Paul was looking forward to his visit to this Roman church. It's one of the few churches he wrote to that he did not personaly plant (the church at Colossae being another example). So first, he's writing to them to be sure that they had the right gospel. He is looking to this church to function as a new base of ministry as he expanded his reach further west, and he wanted to be sure they were on the same page when he got there.

That's not to say that Paul wasn't correcting everything. This church was probably planted by Jewish believers who had been part of the Pentecost-era church in Jerusalem, and so it had a Jewish foundation. But like many of the churches in the New Testament period, it was mixed, and included Gentiles. When the Jews were expelled from Rome by the emperor Claudius in 41AD, the church would have reverted to Gentile leadership. It would have AT MOST been about 10 years old at that time.

The Jews were permitted to return in 54AD, and so for more than half of this church's history, it was a Gentile-only church. As one could imagine, there was a degree of turbulence upon that return. And so about a year after Jews were again part of this church, Paul was also writing to ensure that they and the Gentiles were getting along (e.g., see Romans 12:9-13; 14:1-23).

When Paul got to Rome, he wanted refreshment, not conflict.

To put it in simple terms, Paul had a difficult life. He desribes in Romans 15:18-19 what his life was about:

by the power of signs and wonders, through the power of the Spirit of God. So from Jerusalem all the way around to Illyricum, I have fully proclaimed the gospel of Christ.

Proclaiming the gospel sounds so noble and beautiful. But it was marked with deep, severe physical and emotional pain. Paul describes this in 2 Corinthians 11:22-29. Just the beatings, or the stoning, or the lashes would have been enough to deter me. But not Paul: besides all that - shipwrecks, exposure, seemingly consistent difficulty - this wasn his life.

But not just that - there was also 'the daily the pressure of his concern for all the churches'. And this concern wore on him. He had to the senior aposlte - Peter - and his best friend, Baranabas, about their inconsistency relative to the gospel (Galatians 2:11-13). He had to rebuke the Galatian church for flirting with a different gospel (Galatians 1:6-9). He had to correct a variety of issues in Corinth (e.g., 1 Corinthians 1:11-13).

In short, as he looked to the future, Paul knew that he needed a place of refreshment before he could continue on with his apostolic mission.

Paul's life mission was all about taking the gospel where Christ was not named (Romans 15:20). He makes the remarkable statement that 'there is now no more space for me to work in these regions' (Romans 15:23). What does he mean by that? Simply, but profoundly, that he has planted churches sufficiently that they are taking care of business. So he has his eyes set on the West, Spain (Romans 15:28-39), and all that lies on the other side of Rome.

Paul was thus at a point of transition in his ministry; he had fulfilled his assignment in the easter Roman empire, and now he was moving on. But before he did so, he recognised that to enter that new season in strength, not weakess, he needed to be refreshed. And he felt then Roman church would be the perfect setting for this period of refreshment.

One reason this church in Rome could be a place of refreshment is that they believed the gospel. In Romans 15:14, he describes them as 'full of goodness and filled with knowledge). By writing this letter, he was making his understanding of the gospel clear so that there would be no conflict when he got there.

But more than getting, he also wants to give. And so he notes in Romans 1:11-12 that 'I long to see you, that we may be mutually encouraged'. That is, he wanted to impart some gift to them - he wanted to preach the gospel to those who were in Rome, and to be refreshed by them.

4. How do we get refreshed?

When we think of spiritual refreshment, many of us tend towards the individualistic spiritual disciplines. And it's true that these are a source of refreshment to us. For example, we might try to find refreshment through God's Word.

In Psalm 19:7, we read that 'the law of the Lord is perfect, reviving the soul'. And in Psalm 19:8, that 'the precepts of the Lord are right, rejoicing the heart'. A key to a revived soul and a refreshed hear is learning how to inhabit the magnificent and precious promises given in the Bible (2 Peter 1:3-4).

We also know that there is a kind of refreshment that comes from God's presence. In Psalm 16:11, the Psalmist notes that 'You make known to me the path of life; in your presence there is fullness of joy; at your right hand are pleasures forevermore'. The Lord is a God of joy.

But there is a kind of refreshment that comes from God's people. Paul wrote to a friend of his in Philemon 7 that 'Your love has given me great joy and encouragement because you have refreshed the hearts of the saints’. This brother Philemon was a good refresher. And, according to Philemon 20, Paul wanted some of it: 'Yes, brother, I want some benefit from you in the Lord. Refresh my heart in Christ.

This is why Paul was looking forward to being in Rome. There is a supernatural refreshing that comes from being with like-minded people who share our commitment to the mission of God. We don't even have to talk only about the mission all the time - just knowing that we share the mission, are committed to the mission, and will do whatever it takes for the mission to be fulfilled - this encourages us.

God has given us a Spain - a mission to those who do not yet know the transforming power of God's presence through a relationship with Christ. As we mutually refresh each other through words of life, encouragement, and affirmation, we will get on with our mission, we will get it done - in Spain, and beyond.