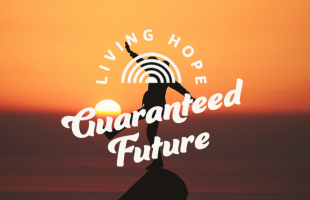 A Guaranteed Future: Inheritance and Inheritors

Another way living hope is described is as a guaranteed future. He points to two dimensions of the guarantee – He keeps an inheritance safe for us, and He protects us so that we can receive the inheritance He has for us.

Verse 4 states that it is an “inheritance that is imperishable, undefiled, and unfading, kept in heaven for you.”

Look at the words Paul uses to describe this inheritance: imperishable – it cannot die; undefiled – it does not get messed up; unfading – it is permanent, and its glory does not diminish over time. Now, more than just a description of our inheritance, this is also an indicator that Peter is pointing forward – not only to eternity – but also to the resurrection body we will inhabit in eternity.

Notice these words – imperishable, glory, power, spiritual. This is the kind of body we will inherit for eternity. It’s like going on a trip to a hot and humid place, or visiting the arctic tundra – you have to get clothed for the place you’re going to be. We’re going to be living in a land called eternity, and so we have to be clothed in a body that is suitable for that environment. The inheritance that we are going to receive is imperishable, undefiled, and unfading. We need a body that matches these characteristics.

Now, to help us understand this, think about a human inheritance. This is like reading your parent’s will before they die. The will is already written, and in that sense, it is certain. But you have NOT inherited anything yet because they haven’t died yet. This inheritance falls into a unique category that we might call certain but not yet experienced.

This is the nature of our inheritance from God: it is certain but not yet experienced. Now, this is what makes this difficult for humans, because we only experience the future as contingent. In other words, for us, we don’t know the future, and the future feels very uncertain. But it is not uncertain for God, and so He can speak with certainty about it.

This is the NATURE of biblical hope: we live now with joyful confidence in a certain future rooted in eternity.

The big point of all this is that OUR FUTURE WITH GOD IN ETERNITY IS GUARANTEED.

In verse 5, Peter gives us a FURTHER DESCRIPTION of the LIVING HOPE he is calling us to embrace.

who by God's power are being guarded through faith for a salvation ready to be revealed in the last time.

Here, he describes the other part of the guarantee – he guards us – and he also points again to the nature of the inheritance he has for us: Notice that verse four, ends with you and verse 5 begins with who. The who and you are the same person; or YOU are the WHO and the WHO is those who have been born again (from verse 3).

In verse four, the YOU WHO people are described as those for whom God is keeping an inheritance in heaven. In verse 5, the YOU WHO are those who By God’s power are being guarded through faith: God is not only keeping our inheritance, he’s keeping us. Imagine a person who worked all their lives to build an inheritance for their child, but then, their child dies before them. There is an inheritance, but no one to inherit it. That’s really sad. What a waste!

Remember – who is us? Us is you, us is who, us is those who have been born again. The point is that it would do God no good to keep an inheritance for us, and then we’re not there to inherit it. In the same way, that God can keep our inheritance safe, he can keep us safe.

Now, the power phrase here is ‘who are being guarded’: GOD is guarding us, and he does that through faith. That is, even God is working in and through our faith; he sustains our faith by his power – this is how he guards us.

Notice the phrase for a salvation ready to be revealed in the last time. Now, you might be thinking – I thought I already was saved. If I’m already saved, how can salvation be revealed?

It’s important to understand that salvation occurs in three time zones – past, present, and future (See Romans 8.29-30). In the past, I have been saved, in the present, I am being saved, and in the future, I will be saved. In the past, we have been justified; in the present, we are being sanctified, and in the future, we are being glorified. That is, even though we are LEGALLY as saved now as we will ever be, we have not experienced the totality of the salvation that God has for us. That salvation includes glorification when Jesus returns and clothes the righteous with immortal, glorious bodies. This dimension of our salvation – our inheritance of glorified bodies suitable for inhabiting eternity – is going to be revealed in the last time.