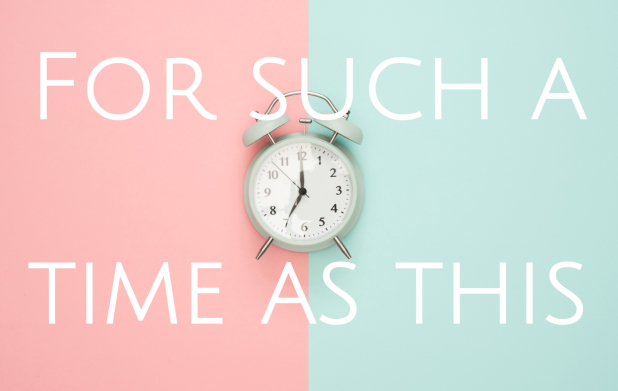 Do you ever feel like you're caught up in circumstances way too big for you? That's when we need to remember that God has placed you in the space-time continuum at the right moment because He has wrapped your life with purpose and destiny.

This is the big story from the book of Esther: a young Jewish girl is just living life, and before she knows it, she's caught up in political machinations and a plot to destroy her people, the Jews. She acts bravely and breaks a law that prevented anyone from coming to the king uninvited; in her moment of boldness, she wins the king's favour, he intervenes, and the Jews are saved.

What words prompted her to act bravely? This is what her uncle, Mordecai, told her:

Do not think to yourself that in the king's palace you will escape any more than all the other Jews. For if you keep silent at this time, relief and deliverance will rise for the Jews from another place, but you and your father's house will perish.

In other words: God's going to intervene, but you have the chance not only to save yourself, but also your people. And then he asks the powerquestion (Esther 4:14):

And who knows whether you have not come to the kingdom for such a time as this?

Mordecai implies that God brought Esther onto the scene precisely so she could act boldly on behalf of her people. Here's the big idea: it's not just Esther whose life is marked by destiny; this is true of all belivers.

This is what God tells Jeremiah:

Before I formed you in the womb I knew you, before you were born I set you apart (Jeremiah 1:5).

This is how Paul relates his own sense of calling:

And lest we think that this is just prophets and apostles who are called by God, the Psalmist writes this:

Your eyes saw my unformed substance; in your book were written, every one of them, the days that were formed for me, when as yet there was none of them (Psalm 139:16).

The point to recognise is that God is sovereign over our lives, and he has dropped us into the space-time continuum at the moment of his choosing precisely because there is purpose and intention and destiny that marks our lives.

Sometimes we look around the the geopolitical scene, and we feel lost in a turbulent world; sometimes we look at our personal circumstances and it feels like God has forgotten us. But the book of Ruth teachsus that God  is at work in the real mess and moral ambiguity of human history, even when it seems like he’s nowhere to be found.

Because our lives have a God-given purpose, we can trust God with our lives.

It's not just Esther who was born at the right time - you were as well! There may be times when God's plan seems far, far, away, but don't despair: God is at work, sometimes visibly, but always behind the scences, and He will bring your destiny to pass. That's why there's no safer place to be than entrusting your life to his care.