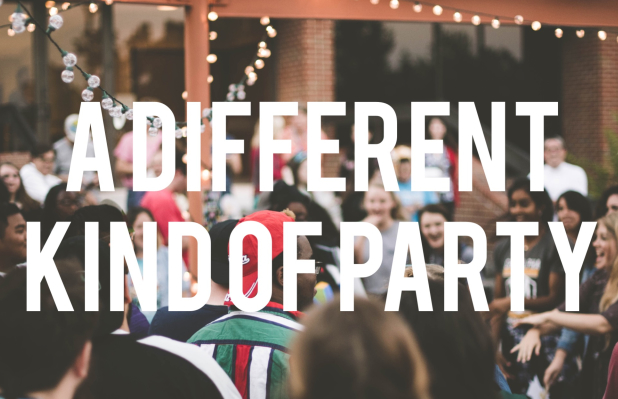 It may come as a surprise, but Jesus made a point of going to parties. We may think of Jesus as an emaciated desert wanderer who spoke in chapter and verse, but in truth, he was the hot ticket item in the Galilee social scene. This meant he got party invitations, but when he showed up, it was a party with a difference.

In Luke 5:27-32, we see Jesus calling people to follow him. In this case his target was a sole individual – Levi – described by Luke as a tax collector. We have no idea what previous engagement Jesus Levi might have had, but he responded instantaneously to the invitation of Jesus, summarised by the brief statement, ‘Follow Me!’.

There are three key things to notice about Levi. First, tax collectors were notorious for extorting more than the necessary level of tax. These guys were something akin to mafia collection agents … except they worked (indirectly) for the government as sub-contractors. So this was legal extortion. Levi was a bad guy. And Jesus gave him an invitation to be on his team.

Second, note Levi’s response: he didn’t try to make a deal (what if I just follow you on Mondays, Wednesdays, and Fridays?); he didn’t propose a counter-offer (what if I keep working here and fund your ministry? I’m rich!); he didn’t try to delay (look, it’s in the middle of tax season; give me three weeks and I’m all in). No, he just walked away. Somehow, it seems that instantaneously Matthew discerned the superiority and eternality of what Jesus offered compared to the fleeting pleasures of the life he lived.

Third, note Levi’s response, part 2. He was so overwhelmed with joy at whatever benefit he perceived came to him through Jesus that he three a big party. He wanted his friends to get in on the action, and so the party was populated by other tax collectors like Levi. From a 1stcentury Jewish perspective, this was simply a big party of sinners with a renegade rabbi in attendance.

Do you ever grumble? To grumble is to complain with the feeling of being annoyed. It’s not pleasant to be around a grumbled. Most people who grumble feel justified in their grumbling; something has gone wrong – they have been slighted or experienced an injustice.

So what’s up with the Pharisees and scribes? Their complaint against Jesus is simple on the surface: "Why do you eat and drink with tax collectors and sinners?" At issue is the meaning attached to this practice. Table fellowship wasn’t simply about food, but about shared values. In 1stcentury Jewish culture, eating with implied endorsement of. So the Pharisees were confused: was Jesus endorsing the sinful lifestyles of these unfaithful Jews? They thought so.

Jesus reversed the script. Rather than reserving table fellowship for those who were of him, he used the opportunity to call those he wanted to be with him. He states it plainly in Luke 5:32: I have not come to call the righteous but sinners to repentance. He called by engaging, and he engaged with fellowship.

Not everyone is called in the way Jesus called Levi; not everyone responds the way Levi responded to Jesus. The calling of sinners for Jesus involved intentional engagement around fellowship. With his disciples, Jesus stayed on mission to make disciples even in the face of establishment opposition.

In the first part of this chapter, Jesus called fisherman by telling them that now they would be fishing for people (Luke 5:10-11). In the episode just described Jesus called a tax collector and used his connections to make a gospel case.

Jesus summarises his mission like this: ‘I have not come to call the righteous but sinners to repentance’. As followers of Jesus, our job is to do the same thing. There are many different types of sinners and many means for calling them to follow Jesus. But they all share the need to repent.

When Jesus said, ‘Those who are well have no need of a physician, but those who are sick’, he wasn’t trying to let the Pharisees off the hook by implying they weren’t sick. It was just the opposite: the key to wellness is recognising our condition, and the fundamental flaw marking all people is sinfulness. We all need the healing on offer in Jesus; we all need the benefit he came to bring.

As followers of Jesus, we're tempted to keep the party to ourselves, and sometimes to judge others as unworthy of experiencing what we've come to know as 'ours'. Jesus teaches us to be as big-hearted as the father and engage others so they too might enjoy God life in him. To whom is God sending you to invite to the party?