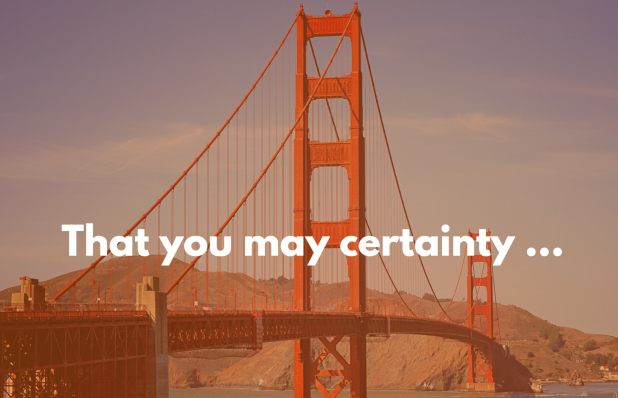 Sometimes, I like to cheat. If I pick up book, sometimes I'll turn to the end to see if I want to read it. When we pop to end of Luke's introduction to his gospel, we learn why he wrote this: so that his friend Theophilus might have certainty about what he's been taught.

This issue of certainty reminds me of a couple of years ago when a few folk from our church walked across the Queensferry crossing when it opened. I heared lots of excitement about the bridge (a beautiful, technological wonder) and about the chance to walk across it.

But there was also alot I didn't hear. I didn't hear that anyone was nervousness about the bridge. I didn't hear people wondering if it was going to hold them up. I didn't hear anyone make this complaint: 'That bridge was designed and built by humans! I don't trust it!'.

For some reason, when it comes to God's Word, we feel justified in doubting. We live in an age which applauds questions more than answers and celebrates doubting above believing. With this in mind, let's look at Luke's move to place us on a sure foundation.

Luke writes that many have undertaken to compile a narrative. In the wake of Jesus’ death, burial, and resurrection, both oral and written tradition emerged. Jesus told his followers, ‘teach them to observe all I have commanded you’. And so his teachings were taught and written down. But people also began to try to put the teachings in context by telling the story of who Jesus is, what he did, and what it means.  When we use the word gospel, that’s what it is: a theological reflection on the life, death, burial, and resurrection of Jesus. That is,

The subject of these wrtings were the things accomplished among us. By sayting 'accomplished' Luke  means that more than the facts of what happened, he is interested in their results and their significance. What does the life, death, burial, and resurrection of Jesus mean? This phrase moves ones attention from a reference only to the original events to the effect of those events in a later time for all who came to believe’.

Among Us means that this wasn’t done in a corner; all of this was public, this was experienced by eyewitnesses, and the effect of this is still going on. People continue to to be touched by the results of what Jesus accomplished. This phrase moves ones attention from a reference only to the original events to the effect of those events in a later time for all who came to believe’.

He notes that  just as those who from the beginning were eyewitnesses and ministers of the word have delivered them to us. Luke's narrative is based on eye-witness accounts. Luke was a second generation believer - he accompanied Paul on his journeys in the Roman Empire and would have had opportunity to interview all the key players (Mary, Peter, James, John) who knew Jesus and shaped the early church.

These were both eye-witnesses and preachers. This is what Jesus told them to do – to witness to what they had seen. Like in a court room, they were expected to tell the truth, the whole truth, and nothing but the truth. The Apostle John especially highlights this dimension of his ministry when he writes this is in the introduction to his first letter:

He is highlighting his eyewitness experience: heard, seen, touched. The apostles – and the gospel Luke records – are not just elaborated stories, these are eyewitness accounts.

And although the date when Luke wrote this is disputed, because it ends with Paul still in prison in Rome, there is a strong likelihoold it was written before his death and before the destruction of the temple in Jerusalem – this means that many of these eyewitnesses were still alive. That is, Luke could not play free with the facts, he had to get them write.

The second point he makes about his sources is that they were ministers of the word delivered to us. That is, not only were they eyewitnesses, but as Jesus told them to, they declared this message to others.

In reflected on his own approach, Luke notes that it seemed good to me also, having followed all things closely for some time past, to write an orderly account for you. Look at the five characteristics of his writing:

5. Luke’s Audience: for you, most excellent Theophilus

Luke is writing to a friend, probably a rich, Gentile nobleman who was a believer. It may be that Theophilus may have been experiencing doubts. He was looking around at a mixed community that, in its early days, was predominantly Jewish, and it was experiencing much persecution. Theophilus was having doubts, and asking one big question: IS IT WORTH IT? Is it worth it to follow Jesus? What is the cost-benefit analysis of faith in Christ?

Rather than telling Theophilus to shut up and stop asking questions, Luke takes time to explain the story of Jesus so that Theophilus can participate with confidence in the community of Jesus. Luke’s second work – ACTS – which is really a continuation of Luke, and so is sometimes called ‘Luke-Acts’ – in this second work, Luke focuses on that community. But that community came to being because of the person of Christ and his mission. Luke’s approach is to give Theophilus a detailed account of the life and mission of Jesus.

Here we have the main point of Luke's introduction. Luke is writing so that you may have certainty concerning the things you have been taught. Luke wants Theophilus to have firm stability and certainty in the things he had been orally taught. And so he's writing it all down. Theophilus had already been taught these things; by putting them on paper, Luke is providing the detailed evidence of who, when, and where so that any interested party could very that all this happened.

In the same way that Luke wanted Theophilus to have certainty, we can certainty in what we have been taught; we can trust God's word as reliable. Faith is simply acting like God is not a liar, and this is premised on God's capacity to deliver to us the scriptures he wants us to have. And so we can trust his word.

The word you are standing on is not some flimsy bridge like a scene out of an Indiana Jones movie; you can trust God's word as a reliable bridget over the troubled waters of doubt that try to creep into our hears. The Bible gives us an accurate picture of who Jesus is, what he did, and what this means for us. And that's good news.