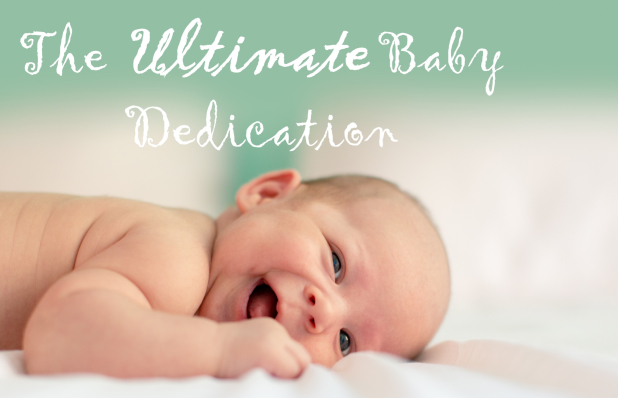 Baby dedications are great. It's a key moment in the life of a family when parents present their children to the Lord and ask for his help to be faithful parents.

In Luke 1:57-66 we read about the events of John the Baptist's baby dedication. John is known as John the Baptist because when, as an adult preacher of God's good news, people who repented would get baptised.

The community gathered to celebrate with Zechariah and Elizabeth  - not only because their baby had been born - but because this baby had been born to them as older parents and they had given up hope of having children, and then they conceived, and nine months later, the baby was born. So it was a big deal for them and their community.

The naming of the baby was also a big deal; following 1st-century Jewish tradition, friends and family wanted the baby to be named after the father. But Zechariah and Elizabeth had a word from God that his name should be John, and that's what they did. The name John mean's 'The Lord is gracious'. It's a beautiful picture that God smiles at us even though we don't deserve it; God extends to us love and favour that we have not earned.

But many people with great names don't become great themselves. There were other babies born in the same village, but we don't know anything about them. We know about John for this reason: he devoted his life to God's purpose. We can say it like this: we find our place in life when we find our purpose in God.

In Luke 67-80, we read the words of blessing that Zechariah spoke about John. These words are called a prophecy because they are speaking of things that are in the process of coming to pass. Zechariah is praising God for what he is doing through sending both John and Jesus to the nation of Israel. Though there is much in this passage, I'll comment only two key verses.

In verse 76, we read this: And you, child, will be called the prophet of the Most High; for you will go before the Lord to prepare his ways.

John is God’s prophet. John prepares the way for God who comes to his people through his messianic visitation. A prophet is one who speaks God’s word and proclaims or heralds the good news of God’s salvation.

As we go through the story, we're going to see that the way John does his work of preparation is by preaching a message of repentance. To repent means to turn, to have a change of heart or mind and turn away from living lives for ourselves and turn towards God.

John gets the nation ready for Jesus by telling them to turn.

In verses 77 and 78, Zechariah gives more detail about this job description of John's:

to give knowledge of salvation to his people in the forgiveness of their sins, because of the tender mercy of our God

That is, forgiveness is a product of repentance, which means to turn to God alone who can deal with sin. The Greek word for forgiveness means release from bondage or imprisonment. As it relates to sin, it means forgiveness or pardon, of sins (letting them go as if they had never been committed), remission of the penalty.

So, to be forgiven of sin means that we need to recognise that what sin is. is, The Greek word here for sin harmaritia and means to miss the mark. The mark is the character of God – God’s perfect, holy, blameless character.  We tend to think that if we’re doing better than somebody else, we’re going OK. As long as we’re middle of the pack, it’s not to bad. The problem is that our job is not to compare ourselves with others, but with God.

This is on display for me any time I got to the gym. I’m convinced that men are just as bad as women about being overly concerned with how they look. Just go the gymy and look at the way men look at themselves. First, the gym design includes all -mirror walls. Second, men are constantly checking themselves in it. But they try to do it without letting somebody else know ttat they’re doing it. And they look around, and they think they look good, and then in walks some professional body builder who’s all jacked up on steroids, and the original guy gets put in his place … he’s not so big after all.

But in first century Palestine, even though the Jews were living in their ancestreal homeland, and the temple where they worshipped God had been rebuilt, they were not free; they were dominated by foreign invaders known to history as THE ROMANS, the most powerful nation on the earth at that time. So if you asked them about salvation, they would have thought about political freedom.

And that use of the word goes back to their ancestors who had also been dominated by a foreign power known as the Egyptians.  They were slaves in Egypt, forced to build the pyramids or whatever monuments the Pharaohs were up to in those days, and God intervened and set them free so that they could worship God and live without interference. And so this is what most first century Jews would have thought of when you mentioned the word salvation.

Many of the issues we think about are external to us, things we can’t personally control, things that make us feel helpless – like climate change, or Brexit, or the state of Scottish football. But in his prophecy, when Zechariah uses the word, he’s thinking about something much deeper than political freedom or economic freedom. He’s thinking about spiritual freedom, he’s thinking about people being restored to God.

The good news in this passage is that we can be saved and forgiven and experience eternal life through what Christ has done. In the gospel of Luke we eventually get to this good news; in the words of Zechariah, we get a foreshadowing. And we are reminded that the we know about John because he found his purpose in life by finding his place in God.

The good news for us is that - not only can we be forgiven, but we can also discover our destiny. God has a purpose for our lives, and he invites us to discover that through the first step of salvation in Christ.