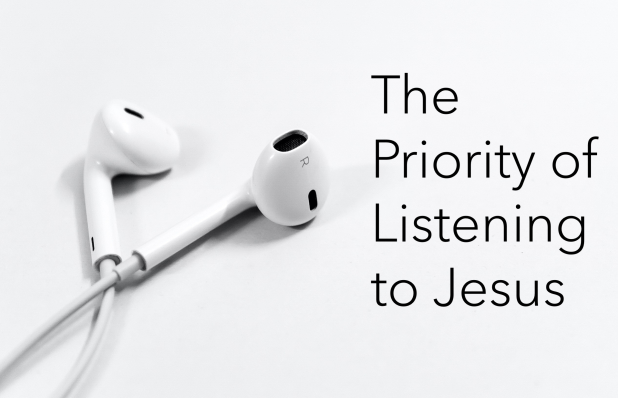 What is that gets crowded out of your life when things get too busy? What is it you leave behind when you’re in a rush? Have you ever gotten to the end of a day and thought, ‘Oh no, I forgot to eat today!’ Have you ever been in such a rush in the morning that you forgot to brush your teeth – or put on your underwear?

Like a boat that is sinking, when time gets tight we start to throw things overboard until all that we are left with are the bare essentials.

In Luke 20:38-42, Jesus teaches us that what we think is essential isn’t, and what we don’t think essential is.

v. 38 Now as they went on their way, Jesus entered a village. And a woman named Martha welcomed him into her house.

New Testament scholars assume that Martha was the head of the house; perhaps she was widowed; perhaps she was never married, but as the one doing the welcoming, it seems that she was the older sibling, the one in charge.

What was the basis for her welcoming? Perhaps she had heard him teach; perhaps she had heard of his reputation. She knew it would be a good thing to have Jesus in her home; having Jesus in her house was a sign to the community that she was endorsed by Jesus. But as we’re going to see, it’s one thing to have Jesus in the house; it’s another thing to let the agenda of Jesus have it’s way in the house.

Martha had a younger sister named Mary. In this story, Mary is a silent witness: she speaks by what she does, not what she says. And what she is doing is counter-cultural: to sit at the fit of rabbi was the posture of a disciple, and rabbis only had male disciples. So this little statement is remarkable in that first, Mary felt sufficiently secure to sit at the feet of Jesus and second, that Jesus welcome Marry.

But notice the posture of a disciple: listening to his teaching. The foundation of the Christian life is listening to the word of God.

Luke describes Martha as distracted (Gr. Perispaō), which means to be driven about mentally, to be over-occupied, too busy about a thing. To be distracted means to be pulled away by something, to being overburded with an affair

Martha’s problem is found in the word distraction: she was preoccupied with doing rather than listening. She was pulled away from the feet of Jesus to do what she thought needed to be done.

Serving is great, but serving can distract us from the primary thing – hearing God’s word. Think about this: how many humans in history have had the chance to physically sit at the feet of Jesus and listen to him? Not many – Martha had the chance – and she blew it.

She was too worried about getting her canapes just right; she want Jesus to eat one of her voul-au-vents and say, ‘That was great!’. Jesus wanted her to hear the words of eternal life.

You may know someone who is GREAT at serving, BAD at listening. You may be that person. Or, it may not be serving that is your distraction; but whatever it is, it’s not worth missing out on what Jesus has to offer.

Martha is incredibly clever – in one short sentence she accuses Jesus of not caring and Mary of being selfish. It’s not that Martha minded serving; she seems to thrive in doing stuff; it’s that she’s bothered Mary isn’t working as hard as she is. Not just that, Mary is sitting … and Jesus seems to be endorsing this behaviour, so first, Martha is bothered that Jesus doesn’t care, and second, that Mary isn’t helping.

Now, I think what’s really going on is that the year before Mary gave Martha a Jamie Olver cookbook for her birthday – you know, one of those Jamie Oliver cookbooks called 15 Minute meals … she’s discovered that 15 Minutes is a lie; it takes an hour and 15 minutes for mere mortals to make one of those meals.

Here’s the thing – we’re always going to see people who serve less than us; serving – serving well, serving lots – is important. Jesus is NOT anti-service. But Jesus is ANTI-DISTRACTION.

Jesus describes Martha as ‘anxious and troubled’. The word anxious (Gr. Merimnaō) means to be troubled with cares; to feel uncertain and apprehensive about how things are going to turn out. The Greek word for troubled (Thorybeō) means to be disturbed, thrown into confusion, troubled in mind. This is Jesus’ evaluation of Martha – in short, she is overwhelmed in her mind because she has too much to do.

Being a Martha is NOT about serving too much, being a Martha is about the lack of proper prioritisation. This reminds me of most of us. Do you remember life before lockdown? What were you doing? You ran the kids to ballet, judo, violin, and underwater basket weaving, and … did Jesus get the best, or the leftovers?

First, he clarifies what is most important: only one thing is necessary. We really don’t believe that do we? We immediately want to correct Jesus for being hyperbolic, for exaggerating, for going to an extreme to prove a point. BUT HE’S RIGHT: if you get this one thing right, everything else will fall into place.

In short, this is how Jesus evaluates Mary’s choice:

And here’s the good news: we have access to what is necessary, good, and permanent if we, like Mary, will prioritise the word of God.

Like Martha, some of us receive Jesus on our own terms: Martha received the Person of Jesus; Mary submitted to the Word of Jesus. To receive the word of Jesus means to submit to his authority; to recognise – not only his fame and his power and his prestige, but his identity: Jesus is the Son of God. Like the Father said on the mount of transfiguration, LISTEN TO HIM.

The most important thing you can do is sit at the feet of Jesus and eat the meal he serves. But we are susceptible to letting secondary things become primary. When can serving become a distraction? Here, Martha was neglecting the word of the Lord to serve the Lord the food of man.

Martha’s problem was not serving, it was priorities: serving is great – but serving comes second; the first step towards being rightly related to Jesus is to sit at his feet and listen to his word. Martha was serving a human meal and missing a divine meal; Mary was eating a meal served by Jesus knowing that she would have the rest of her life to serve the human meal.

Here’s the secret to life. Organise and execute around priorities. And that means you have to know what the priorities are. Our greatest priority is to sit at the feat of Jesus, listening to his word. The priority of partaking of God’s Word positions us for intimacy with God and powerful service in his church.