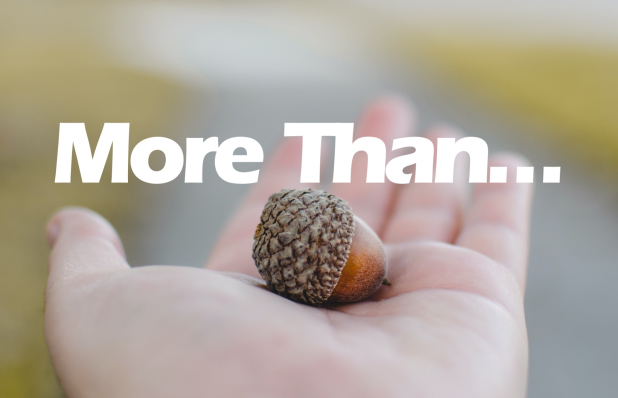 In May 2019, the commencement speaker at Morehouse College in Atlanta, Georgia, gave the 400 graduates much more than they expected in his speech. The speaker, Robert F. Smith, is a billionaire, and towards the end of his speech, he told the graduates that he was paying off all of their accumulated student debt. That was a total of around $40 million. That's a bunch of money; and while it only represents 1% of Smith's wealth, it is incredibly significant for the students with large debts.

This is God's grace: we owed a debt we could not pay, Jesus paid a debt he did not owe, and by receiving what he offers through faith, we walk away free from our debt. Our debt to God is the guilt of our sin; Jesus paid the ransom of his own life, and by his blood we are justified.

Grace is God's unmerited, unearned love, favour, and good will given freely and generously in Christ. It is God's 'more than enough', over-the-top goodness. It's like the smile from heaven we don't deserve.

But it's more than this: below, we're going to see that grace is God's power that overthrows the reign of sin and death in our lives. It's like the sun shining on the snow: it doesn't simply bring light, it brings power - and the snow begins to melt. It is by the powerful force of his grace that God melts the dominion of sin and death in our lives and brings us into the experience of his goodness.

The Many Dimensions of Grace

There are many dimensions of our relationship with God effected or brought about by God's grace. We are:

One of these dimensions, Justification by faith, is described in the Bible as central ingredient of our faith and our standing with God. The word 'justification' is legal, and it means that God has declared us 'not guilty' on the basis of what Jesus has done (bearing our sin in his body on the cross. We are forgiven - justified  - just as if we have never sinned - on the basis of faith. If you're a jacked up sinner like me, this is really good news. But there's more.

The phrase 'more than' or an equivalent appears six times in Romans 5:1-21. Paul repeatedly makes the point that God's grace is more abundant than we realise:

Romans 5:9 Since, therefore, we have now been justified by his blood, much more shall we be saved by him from the wrath of God. Justification - God's declaration of 'not righteous' - is in the past tense here. It's already done. Paul's point is that if God has justified us, much more shall our salvation be finally finished.

He makes the same point in verse 10:

In order to appreciate Romans 5:15-21, we need to understand how sinful Adam's sin is. Paul explains this in Romans 5:12:

Therefore, just as sin came into the world through one man, and death through sin, and so death spread to all men because all sinned—

In this one verse, Paul explains why everything is as messed up as it is:

Thus, every human in world is under the twin powers of sin and death. But God's grace is greater, and through his grace we are delivered from the dominion of sin and death. Note how Paul describes what God has done:

Romans 5:21: as sin reigned in death, grace also might reign through righteousness leading to eternal life through Jesus Christ our Lord.

The big point Paul makes is that we are more than forgiven and more than justified, we are brought into the experience of the very life of God.

This is why the example of the billionaire above is not completely accurate. In the case of the students at Morehouse College, their debt was forgiven. For the gift of Robert F. Smith to approximate what God has done, he would have had to say something like this:

In addition to forgiving your student debt, I'm also adopting each of you into my family, you're going to be eating at my table every day, and I'm writing you all into my will to have a share in all of my wealth through an inheritance larger than you can imagine.

This is the point: God has more than forgive us - he has adopted us and joined us to himself and given us life. He has done much more than. That's why in Ephesians 1:6 Paul erupts in praise to the glory of God's grace:

to the praise of his glorious grace

When you get grace - when you really understand it, you'll also erupt in praise to God. So get grace - and praise him!