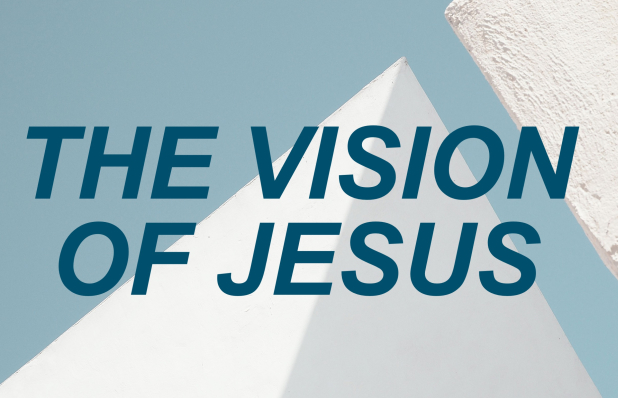 In Revelation 21:1-4, we read about God's ultimate vision for the universe: there will be new heaven, a new earth, and most beautifully, death will be abolished. That is, Christ will destroy all the destruction unleashed by Adam and Eve. It is the plan, the mission of Jesus to accomplish a full restoration of reality to God's original intention.

A vision is a statement of a preferred future; it's a picture of the way things can be (or in God's case, will be). A mission is a statement of purpose; it's what we're going to do to fulfil God's vision. In a few key statements, Jesus paints his vision of what will be and gives us a mission to do.

1. A Vision of Restoration

When Jesus began his ministry, he drew on the book of Isaiah to announce his vision in Capernaum:

The Spirit of the Lord is upon me,
because he has anointed me
to proclaim good news to the poor.
He has sent me to proclaim liberty to the captives
and recovering of sight to the blind,
to set at liberty those who are oppressed,
to proclaim the year of the Lord's favour.

Jesus is all about restoration: setting captives free, bringing vision to the blind, good news to the poor, and breaking oppression. All of this is summarised by the his intention to delare 'the year of the Lord's favour'. Jesus is undoing what was done by Adam and Eve; death will die through the death of Jesus; life, health, and liberty will be established.

2. A Vision of Restoration - Applied

In Luke 5 - the very next chapter, Jesus demonstrates in remarkable fashion what he's up to. Everyone would have cheered the vision of restoration, but Jesus makes clear in Luke 5:20 that his primary agenda is inner restoration through dealing with sin, the root cause of all human woe. When friends of a parayltic demonstrate great faith by breaking into Jesus' teaching session through the roof of the overly crowded house, he says:

This provoked questioning because, after all, only God can forgive sins. And this was Jesus' point. He could forgive sins. But to demonstrate his priority - he also healed the man:

Which is easier, to say, ‘Your sins are forgiven you’, or to say, ‘Rise and walk’? But that you may know that the Son of Man has authority on earth to forgive sins”—he said to the man who was paralysed—“I say to you, rise, pick up your bed and go home. Luke 5:23-24.

Yes, Jesus is going to restore, but he starts on the inside by restoring people to God.

3. A Mission Statement: Seeking and Saving

The episode in Luke 19:1-10 is famous; passing through Jericho on his way to Jerusalem, Jesus meets a short man named Zaccheus. But Zach wasn't simply short; he was an extortioner working for the Romans as a tax collector. Having just taught in Luke 18:24-25 that it was difficult for rich people to enter the kingdom of God, Jesus demonstrates the power of God by bringing salvation to Zaccheus.

So far, so good; Jesus, however, encounters a problem when they grumbled. They did not like the fact that Jesus was eating with a sinner (tax collectors were very naughty people). In reflecting on this episode, Jesus used the opportunity to present a life mission statement:

For the Son of Man came to seek and to save the lost.

This is not just a one off; Jesus communicates the same thing in different places and in different ways. For example, In Mark 2:17, he says:

It is not the healthy who need a doctor, but the sick.

I have not come to call the righteous, but sinners.

The injunction to seek and save the lost comes four chapters after Jesus, also reacting to grumbling  by religious leaders, told three stories of lostness (Luke 15). A shepherd lost a sheep, a woman lost a coin, and a man lost a son. There was desperate search for the sheep and the coin, and the father wanted his son to return. Jesus is inviting us to eagerly seek the lost like the shepherd, like the woman, and like a father would.

This raises a question, who are the lost? In simple terms, the lost are those who are

Following Jesus means following him in his mission. And that brings us to the fourth statement in which he explicitly defines the mission of his followers.

4. A Commission for the Church

In his final statement before his ascension, Jesus entrusted his followers with a very clear mission:

Thus it is written, that the Christ should suffer and on the third day rise from the dead,  and that repentance and forgiveness of sins should be proclaimed in his name to all nations, beginning from Jerusalem. You are witnesses of these things. Luke 24:46-48

Jesus wants this message to go world-wide through his people. The message is simple: repentance and forgiveness through the the death and resurrection of Jesus. Salvation through what Christ has done.

But here's the trick: how do we do that in a post-Christian context? How do we seek and save the lost in society has already rejected the notion that Jesus is who he he said he is? Though some people believe before they belong, others need to belong before they believe. That is, they need to experience the transforming love of Christ lives out in community.

By this all people will know that you are my disciples, if you love one another.

Jesus calls us to a level of love with each other that demonstrates the transformation we experience in him. That means we make a deep commitment to think the best about each other, to treat each other the way we'd like to be treated, to have zero toleration to gossip, to torpedo back-biting.

Jesus was a man on mission, and he invites us to join him on mission by sharing the truth of who He is and what He has done with others. And this may involve inviting them along so they can see and taste and experience the goodness of God in community. What is our Vision for 2019? In short: