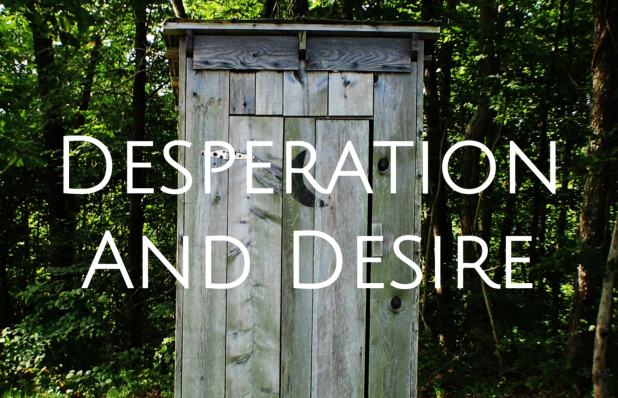 Sometimes the thing we want isn’t the thing we most need. In the words of Mic Jagger: You can’t always get what you want, but sometimes … you get what you need. This was the experience of a man we meet in Luke 5. Interestingly, this guy does very little in the story; most of the interesting action relates to things done around – and to – him. But all the good things that happen stem from a posture of desperation to get what Jesus has to offer.

v. 17: First, notice that Jesus was teaching, and the power of the Lord was present to heal. Jesus focused on teaching, but often, as in this case, he demonstrated the power of God as a means of revealing his identity.

Also notice who’s there: in addition to crowds, the Pharisees and teachers of the law had come out to hear Jesus. He had been doing some remarkable stuff, and word was getting out. The Pharisees were one of three primary Jewish denominations in early first century Israel (the others being Sadcuccees and Essenes). We meet them later in today’s story, and often in the gospel story as people opposed to the message of Jesus.

Vv. 18-19: The four friends of the paralytic were desperate for their friend to get healed.The rumours about Jesus were percolating throughout the towns and villages of Galilee, and these guys wanted their friend to experience the healing action.

The problem, however, is that the house was so crowded there was no more room to get in. I’d always thought it would be cool for church to be like that, but the idea that there’s no room for those with needs to get in just doesn’t seem right. But that’s how popular Jesus was. Everyone wanted to get in on the action.

But these guys were desperate for their friend to get healed. They simply would not take ‘No’ for an answer. So they climbed up on the room, broke through, and let the guy down so he was in front of Jesus. The sermon got interrupted, and then some good things happened.

You may think of a time in your life when you were desperate for something. I can remember a time in Ukraine when I completely, absolutely, desperately wanted and needed a toilet. The recommended facilities were less than ideal; the rustic outhouse didn't even have a door. But in the moment of desperation, all dignity went out the window: I did not care!

Learning point: Desperation dictates the degree of your God encounter. You can experience the benefits of God to the degree you want to. How desperate are you for what’s on offer? When we are willing to trade dignity for desperation, we position ourselves for good things to happen.

The paralytic on a bed obviously needs physical healing, but in v. 20, Jesus does something much more profound. Here’s what happened:

First, Jesus saw their faith. How did he see their faith? By their action. Faith isn’t passive; it’s active. Faith doesn’t easily succumb to a situational interpretation of God’s will. To whom did Jesusever say, when asked for a healing or miracle or intervention, ‘Nah, don’t think so. Sorry, I’m not in the mood’. Never. People who came to Jesus got the Jesus intervention.

Second, Jesus makes a remarkable declaration: ‘Man, your sins are forgiven’. The first order of business is owning sin; it’s yoursin. It’s no one else’s. We live in a world of professional excusiologists; to experience deliverance from the thing that is really the thing, you need to own the thing. The word sin is the Greek word harmartia that means ‘to miss the mark’. Like in archery, we have a mark – a target. The mark, in this case is the character of God – his purity, goodness, holiness, and righteousness. Our problem – all of us – is that we miss it. In the words of Paul to the Romans, ‘all have sinned and fall short of God’s glory’ (Romans 3:23). If this is true (and it is!), then we all need to hear what Jesus says about the sins of this man.

The good news of this passage is simply, but profoundly, that this mans’s sins are FORGIVEN!!! The word for forgiven means to separate, to send away. It’s like a man who divorces his wife and sends her away – to be forgiven is to have our sins sent away. That means the forgiven person is separated from the guilt and the consequences of their sin. They don’t linger around; yes – we’re sinful, but the ‘greater yes’ is the forgiveness of God.

Not everyone liked this forgiveness bit. The Pharisees rightly perceived that only God can perceive sins, and so if Jesus is pronouncing the forgiveness of sins, he is in some way making himself equal to God. Only God can do God-stuff, and forgiveness is part of the God-stuff that only God can do – and so for the Pharisees, that equated to blasphemy. Blasphemy was a serious deal in Judaism – it meant death – and so as early as Luke 5, the threat of death begins to hang over Jesus. All of this is summarised in their question, ‘Who can forgive sins but God alone?’

Sometimes you have to put your money where your mouth is. For us, it is especially pleasurable, even if it shouldn’t be, to say, ‘Told you so!’. For Jesus, this wasn’t so much a ‘Told you so’ as a ‘let me show you who I am’.

When Jesus perceived their thoughts, he answered them, "Why do you question in your hearts? Which is easier, to say, 'Your sins are forgiven you,' or to say, 'Rise and walk'? But that you may know that the Son of Man has authority on earth to forgive sins"-he said to the man who was paralysed-"I say to you, rise, pick up your bed and go home."

It’s not that Jesus doesn’t care about healing the man; after all, he gets healing. But the physical healing is incidental to the spiritual healing already accomplished.

For us, it’s easier to say‘your sins are forgiven’ than ‘rise and walk’. That’s because forgiveness is accomplished in the interior of a person, and thus its accomplishment is imperceptible. But healing – especially restoring the walking capacity of a paralytic – this is visible to everyone and can’t be manufactured. But the Pharisees weren’t as concerned about the healing; the idea that someone could do miracles didn’t equate to claims of divinity. Thus, Jesus validated his capacity to do the actually difficult thing (forgive sins) by doing the thing that seemed difficult – healing the man.

The resurrection is the ultimate demonstration that Jesus’ claims are true. He can – and does forgive sins – because He is God, and God has the authority to forgive. And because he is the lamb given for the sins of the world. He bore our sins that we might share his righteousness. He did it. It works. In him, we can be forgiven. And this brings us to the next point.

In v. 25 the man who was healed (demonstrated by his rising, taking up his bed and going home), glorified God. In verse 26, the people who witnessed this glorified God. That means they ascribed to God greatness and praised him because he had done great things.

The people also said, ‘We’e never seen anything like this’. They probably referred to the healing; that’s not a normal every-day occurrence in most home Bible studies. But what they should have glorified God for forgiving a sinner. This is the difficult move - dealing with sin in such a way that a person can be restored to fellowship with God. In truth, God was worthy of being glorified for both.

Like the people, and maybe even the man who was healed, we tend to celebrate the sensational. But the sensational is forgiveness; it is only with the logic of the gospel that we can stand before God, forgiven. Our tendency is to take forgiveness for granted; we know God is forgiving, and so he should forgive us. Except that’s the point. He doesn’t have to. His forgiveness is rooted in his grace – his undeserved, unearned mercy towards us in Christ.

So what do we do?

First, desperation: you can have as much of God as you want. He’s really not holding back on us.

Second, celebration: honour, cherish, and give God thanks for the fact that in Christ he has forgiven us. He has divorced us from sin and its guilt, and we stand before him, forgiven. No weight, no guilt, just free. He didn’t to, but he did. And that’s good news.